In a recent episode of The Good Doctor, augmented reality plays a key role in saving a patient’s life, and giving viewers a glimpse of new technologies available today that are changing healthcare as we know it.

During the episode ‘Intangibles’, aired on Nov 27th, 2017, the main characters are tasked with performing a near impossible heart surgery in an attempt to help a patient suffering from severe heart problems. Over the course of the episode, a procedure is proposed to correct the patient’s condition, but it is fraught with risk. They decide to use what looks like Microsoft’s HoloLens to rehearse the procedure in augmented reality. The simulation helps to mitigate the risks, but unforeseen complications soon arise that the team must work through in order to ultimately succeed. 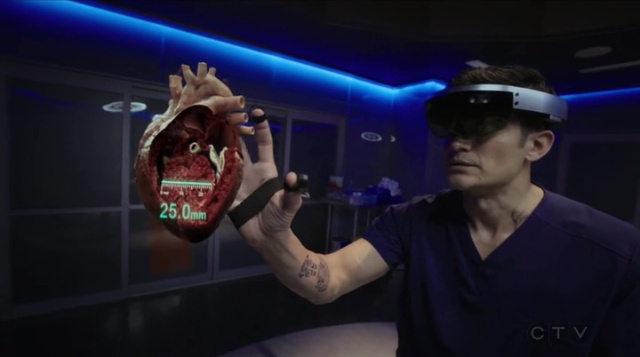 Whether the software presented in the episode is an accurate representation or takes some liberties, this is still an excellent example of big changes in the near future. Other applications of augmented reality range from helping a nurse find veins more easily, to greater visualization of ultrasounds, to reading charts at a glance, to even assisting blind or autistic patients. Medical Futurist wrote a great article you can find here.

Almost in the same breath as augmented reality, 3-d printing technologies are changing the world as we know it. Once again, ‘The Good Doctor’ captures our imagination with an episode featuring a 3-d printed femur made from titanium. To my knowledge, this hasn’t been attempted before. Which begs the question, is it even possible?

We can look to the aerospace industry to help answer this. Earlier this year Boeing announced they would be using 3-d printed parts made from titanium alloys in their newest model of their 787 airliners. This process is expected to reduce costs through the more efficient use of raw materials and will simplify the production processes of parts with complex structures.

So we know the technology is available. However, applying it for medical use is a little bit more involved.  At present, several studies are being conducted to investigate the use of 3d printed titanium implants for hip replacements. Titanium is already used in various prosthesis including hip prosthesis. What 2-d printed prosthesis offers is a cost-effective custom fit that reduces time in surgery as well as recovery. Also because more complex components can be produced easily and efficiently there is an added benefit of creating more biocompatible prosthesis. The rough surface of the image above is by design to encourage regrowth further creating a better fit.

These technologies and other on the way make what would have been science fiction a decade ago a reality today.

2 Technologies for Physicians that Will Capture Your Imagination
Tagged on: 3d printing    augmented reality    Medical technology    the good doctor